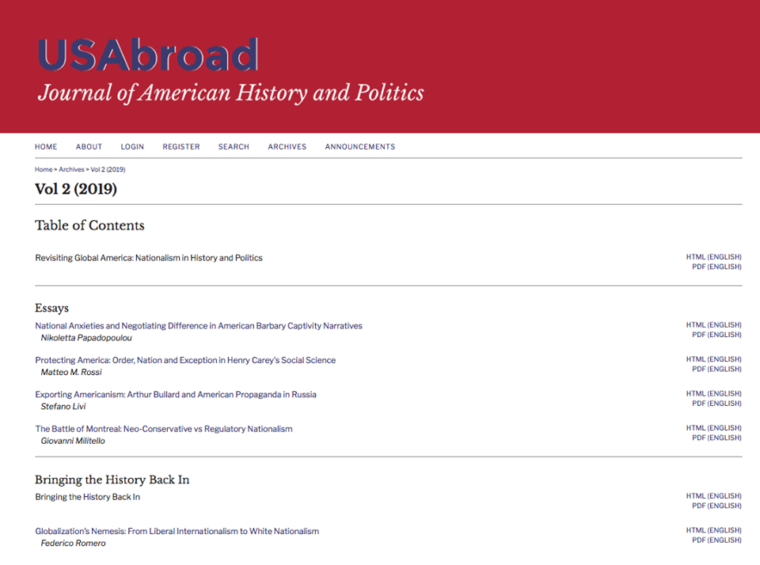 We are pleased to announce that the second issue of the journal USAbroad–Journal of American History and Politics, “Revisiting Global America: Nationalism in History and Politics”, can be downloaded for free at the following address: https://usabroad.unibo.it/issue/view/762.

The second issue of USAbroad covers different historical periods, following the construction and the evolution of the American nationalism from the early Republic to the Reagan Era. The issue seeks to bring new considerations to bear on its meaning by highlighting continuities, idiosyncrasies, and changes in nationalistic discourses, practices, and policies. To offer a comprehensive review of the topic is, of course, impossible. The goal is to add historical pieces to the composite picture of the American nation and give useful historiographical tools to interpret our present of revived nationalism. From this perspective, in the new column Bringing the History Back In, the article of Federico Romero—“Globalization’s Nemesis: from Liberal Internationalism to White Nationalism”—reconstructs the complicated historical road from liberal internationalism to the white (and economic) nationalism of today.

Contents of the second issue:

Giovanni Militello, The Battle of Montreal: Neo-Conservative vs Regulatory Nationalism

USAbroad Editorial Team, Bringing the History Back In