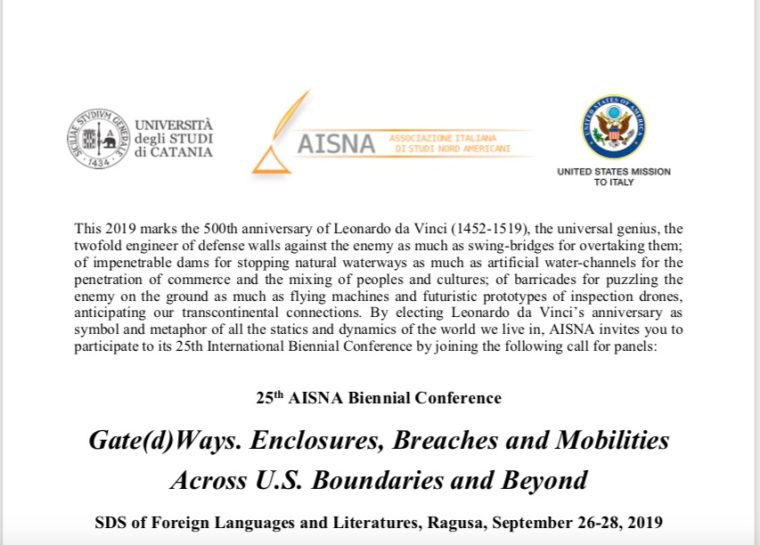 This is a time in which walls and fortifications, either physical or metaphorical, are put up as a response to the mobilization of the Global South. This fosters a necessary reflection upon the role of barricades in our contemporary times. Indeed, walls are a concrete and ideal impediment to the free circulation of peoples and cultures, their existence necessarily imposing the creation of borders, with the implicit corollary of liminality, periphery, ex-centricity and the obvious distinction between what/who is inside and what/who is outside.

After exactly 30 years from the collapse of the Iron Curtain divide, the growing appearance of border walls and barriers across the world – from 7 in 1961 to 77 in 2019 – according to the New York Times and USA Today – shows that their occurrence keeps separating warring people, protecting trade and communication routes, and patrolling the flow of migrants and refugees. At the figurative level, the capital importance of the WWW, for instance, must elicit consideration on the virtual barriers of network security systems erected against the access to knowledge and its availability to people, such as firewalls.

However, history also shows that walls, apart from sealing off communication and connections, can be structural elements instrumental to the creation of long-lasting edifices, parts of a theoretical founding for a different future. They invite intense interrogations on trans-border dynamics across, under, above and along boundaries and passageways, thus promoting new challenges on exchange and interaction.

The 25thAISNA Biennial Conference proposes to reflect critically on issues of seclusion and openness to transit on both U.S. national and global stages, and on the complex scenarios that the loosening and/or forting up of borders generate. All panel proposals should be sent by e-mail to the conference organizer, Gigliola Nocera (noceragi@unict.it), as well as to the secretary of AISNA, Simone Francescato (segretario-aisna@unive.it). The deadline for panel proposals is April 20, 2019. The submitted proposals will be reviewed by the conference organizer committee and the AISNA board. A selection of max. 20 panels will be issued by May 5, notified to the submitters by email, and published on the Conference website.

For more info see the call for panels